Awaken from the Dream 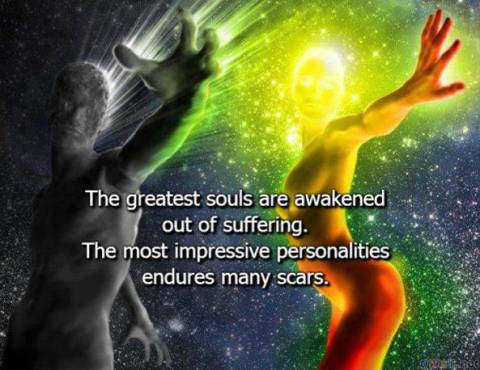 The idea that bipolar disorder is somehow linked to spirituality is an extremely fascinating topic to me. If you or someone you know has experienced manic-depressive episodes, you may be aware of certain spiritual themes that frequently occur with this disorder. It is not uncommon for people diagnosed with bipolar disorder to report times when they felt pure bliss or a divine connection to everything. Some say they received messages from God or that they were God. Some also say they received visions and had a sudden influx of creative ideas. There is often a feeling of power and confidence that is present during a manic episode. To someone with an average/limited level of consciousness, these experiences are indications that someone has “gone crazy” or has “lost touch with reality.” Someone with expanded consciousness, though, recognizes that these experiences have a spiritual undertone, which may indicate that bipolar disorder is more significant than just mental illness.

I’m glad to find that other people are noticing the potential link between bipolar disorder and spirituality and that they are discussing their experiences with this “illness” because it may help us discover a better explanation for why it is happening to more and more people. Of all mental disorders, bipolar disorder and schizophrenia are typically considered the most severe, yet traditional medicine has failed to explain exactly what causes these disorders and why some people suffer while “normal” people don’t. Of all mental disorders, I think bipolar disorder and schizophrenia have the most potential to lead to spiritual experiences, so I’m not sure that I agree with the Western approach of medicating and suppressing whatever emotions, thoughts, and sensations that these people are experiencing. Suppressing what these people are feeling might be a suppression of the spiritual path that these people were meant to follow.

In some cultures, mental illness is not seen as a problem or defect in the person who is experiencing unusual symptoms. In this article What a Shaman Sees in a Mental Hospital, Dr. Malidoma Somé explains that in his culture, mental illness signals a spiritual crisis and “the birth of a healer.” When someone is suffering, people in the community assist that person through shamanic rituals. Of course in Western culture, everyone is expected to fit neatly into the norm, and anyone who veers away from the norm gets labeled as unstable, ill, and/or insane. The unusual symptoms and thought patterns displayed by the “unstable” person are viewed as a problem that need to be eradicated as quickly as possible. There is a lack of guidance and support to allow the person to navigate through the process naturally. Instead of becoming a healer, the person is expected to become a lifelong patient with no hope of recovery or healing. It is a depressing view of mental illness that limits our potential, and I think that view has become outdated.

I used to experience bipolar episodes and was stuck for years in that limiting mindset where I viewed myself as a lifelong sufferer of the illness. The extreme mood swings began when I was 17, and I coped with it for three years without medication. I’m not sure exactly what triggered my first episode, but I recall drinking energy drinks around the time it occurred. It might sound like caffeine is too weak to trigger a manic episode, but I’m pretty sensitive to it and have avoided caffeinated beverages for several years now. My first episode wasn’t too intense. I just felt significantly more energetic, happier, and more social than normal. My behavior and demeanor had shifted enough for a couple of friends to notice that I seemed different. The positive, hypomanic feeling lasted only a couple days, which was followed by a horrible crash into severe depression that prevented me from getting out of bed and going to school. It was hard to explain it to my mother, but I just knew I couldn’t face the world and function while feeling that low. At that age, I was no stranger to depression. I started struggling with depression when I was 15, and I could halfway function with it. But during the bipolar episodes, the crash was excruciatingly painful.

My late teens were a rough time. I had no plans for my future because I struggled with depression on a daily basis that sucked away my hope and aspirations. Then, after discovering that the few friends I had weren’t friends at all, the depression turned into deep resentment against the entire world. To protect myself, I turned into a hermit and spent approximately a year-and-a-half in solitude without anyone to turn to discuss what I was feeling. Most days, I felt depressed and hopeless, but occasionally, a hypomanic episode would strike for a couple of days, which was always followed by a crash into suicidal depression. It took me a while to notice the pattern in my mood swings, but once I realized what was going on, I tried to deny the fact that I needed help. I had convinced myself that I had bipolar disorder, but I stubbornly wanted to overcome it by myself.

In the three years of dealing with bipolar disorder without medication, I found that each hypomanic episode was slightly different from the other. Some were relatively mild and only caused me to feel hyper and happy. Some were terribly uncomfortable due to the fact that I could not sit still or concentrate. One morning, I woke up to such rapidly racing thoughts that I literally thought I was losing my mind. I wanted to scream out of fear and frustration. A couple of manic episodes caused me to feel agitated, angry, and irritable. Those were definitely uncomfortable. There were some episodes that caused me to feel more creative than usual. Then there were those episodes that were very blissful and magical. Though my energy was extremely elevated, I could actually think very clearly during those episodes. My thoughts were extremely positive. I felt powerful, confident, and limitless. I felt love and compassion for everyone and everything. Though I wasn’t a spiritual person at the time, I felt like there was a greater meaning to everything and that everything was perfect as it is. There was so much inner peace and happiness within me that I remember feeling like absolutely nothing could bring me down. I also remember during one of the magical, blissful episodes, I felt a sexual energy stirring inside me that caused me to feel attracted to people I would not normally consider attractive. It was odd and confusing to feel all those things that were not part of my typical everyday experience, but it was also intensely pleasurable to feel such bliss and inner peace on that level.

In the eyes of someone who is not spiritual or consciously awake, I probably appeared to be a very unstable person who was in desperate need of psychological help and medication. I’m not denying that I felt very unstable when I went through all that, and medication and therapy did in fact seem to help, but I think it’s important to investigate why there seems to be a spiritual quality to some of the manic episodes that people, like myself, have experienced. To be honest, I didn’t start noticing the spiritual undertone in some of my episodes until a few months ago when I read a quote by Adyashanti that said, “All is always well even when it seems unbelievably unwell.” I immediately remembered how that exact thought came to me during a manic episode when I was twenty. The thought popped into my mind that no matter what we perceive as wrong in the world, it is all perfectly ok and serves some kind of greater purpose. There was no desire to fix or change anything because it seemed that everything would eventually balance itself. I knew that everything would ultimately be ok no matter what happened. Being in such a peaceful, accepting state of mind was far different from my normally anxious self that wants to control and fix things and make them better. From the spiritual perspective, it seemed that ego had lost its grip during that peaceful state and I felt more surrendered to life.

It is still difficult for me to understand why I experienced all those experiences and symptoms at that particular time in my life, but now that I have been having an actual spiritual awakening for the past year, I wonder if maybe my mind, body, and soul were attempting or preparing to undergo a transformation years ago. Perhaps there was too much pain within me back then that needed to be released and healed, so it’s possible I wasn’t prepared yet for a spiritual awakening. I wonder how many people have followed a similar path in which they eventually had a full spiritual awakening after experiencing manic episodes. Is it possible that if someone has bipolar disorder, they are more likely than the average person to awaken?

Here is an interesting perspective from Sean Blackwell about how bipolar disorder is linked to consciousness:

Although it can be very difficult and confusing for someone to swing so high into euphoria and then so low into debilitating depression, maybe there can eventually be a pay-off if the person is able to work through it and heal themselves. I took medication for seven years and saw a therapist for about three years, but I’ve been going with a natural approach for several months now with no sign of relapse into a manic episode. I think healing is possible, but it may not be an easy, quick fix for everyone who has ever dealt with manic episodes. If you’ve been diagnosed with bipolar disorder or any other mental disorder, I encourage you not to view yourself as a lifelong sufferer. Make positive lifestyle changes, obtain social support so you can discuss your feelings with someone, heal old wounds, and focus on loving yourself more each day. In a future post, I plan to share what has possibly helped me overcome the manic-depressive episodes that were wreaking havoc in my life because I feel like that’s an equally important topic to discuss.

I would really appreciate your comments about personal experiences or thoughts related to bipolar disorder since I’m attempting to come to a greater understanding about the link between mental illness and spirituality.

21 thoughts on “Is bipolar disorder a precursor to a spiritual awakening?”